There is something primordial about Les lucioles by Chorale Joker. It’s a feeling you get deep down after listening to the album. The voices writhe, wail, and thrash about in an animalistic way. At times is it terrifying, but there is an order to the terror. But what did we expect? Joane Hétu, Jean Derome and Danielle Palardy Roger are leading the choir, which features 17 members of the Chorale Joker.

Portions of the album opener Premières lucioles; Haïku — errance feel like an alternative score to the primitive man sequence in 2001: A Space Odyssey. As with that sequence, which ended in violence and destruction, Haïku — errance feels no different. Sucking, and squelching sounds are made around a banshee-like din. Is this a sacrifice after a meal, with the Gods approving or the other members of the tribe showing both respect and impatience, for their time to eat? Either way, it is a visceral way to start an album.

Chaleur des lucioles; Chant des lucioles.1 is probably the most captivating track on the album. It opens with a piece of piercing electronics. Under this breathy wind instruments are played. These are perforated by grunts and gasps. As Chaleur des lucioles; Chant des lucioles.1 progresses the vocalisations become more and more pronounced. Some of the full-on guttural shouts. Others are almost inaudible warbles. Around halfway, the voices come together and start to sound like a conventional choir. It’s striking and really helps hammer everything home. The song is loosely translated to Heat of the Fireflies; Song of the Fireflies.1. The voices sound like fireflies hovering in the night. They drift one way, then another before landing and remaining still and serene.

What Les lucioles really does is allow the listener to drift away from the shackles of conventional music, melodic hooks, chorus, rhythm, etc, etc and allow you to hear something that is pure ID. It is filled with drifting motifs and abstract instrumentation. The real key to the album is the interplay between those glorious voices in the choir. This is where all the dynamic fun happens. As they pull together and apart, we are invited to experience how these small insects interact with each other and their environment. It’s through this understanding that we get a better grasp of how and why we act as we do. 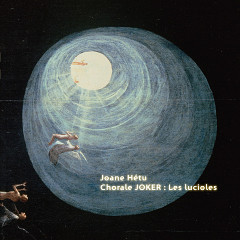 Les lucioles
What Les lucioles really does is allow the listener to drift away from the shackles of conventional music, melodic hooks, chorus, rhythm, etc, etc and allow you to hear something that is pure ID.