The 32nd edition of the Festival International de Musique Actuelle de Victoriaville began with a performance of new compositions by Norwegian guitarist / composer Kim Myhr with Montréal’s Quatour Bozzini in the town’s new cultural space, Carré 150, an impressive $28 million structure that stands on the site of the former Cinema Laurier, one of the performance homes for the festival for many years.

If we’re looking for themes, the first two days’ concerts featured the human voice and by extension, the notion of breathing and the breath mechanism. Both the Bozzini / Myhr ensemble and the Julie Tippetts / Martin Archer Ensemble that followed included vocalists who incorporated poetry and song into the performances. The music of Bozzini and Myhr, who did two pieces, one by Christian Wolff and the other by Myhr, was spare and slow-moving, but insistent and hypnotic, with Angell reciting the poetry of the British poet Caroline Bergvall. The following performance, the Montréal-based vocalist Erika Tippetts / Archer group was performing live for the first time ever, despite the fact that they have been making music in the studio for a decade and a half. Their music is very much in the prog- rock sphere, with elements of the blues, a big bass sound and electric keyboards underpinning the group sound and providing a strong foundation for Tippetts’ soaring voice. (…)

The three performances on Friday evening all featured Quebec and Canadian musicians. Electric bassist / composer / educator Eric Normand lives in the small town of Rimouski, Quebec, where he leads a group called GGRIL, comprised mainly of amateur musicians from the Rimouski area. In starting GGRIL a few years ago, Normand has created an enormously important community music project that is reinvigorating the improvised music scene in Quebec. GGRIL were joined at Victo by veteran Montréalers Jean Derome and Joane Hetu and Ensemble SuperMusique, for an improvisation conducted by French guitarist / composer / improviser Olivier Benoit. There was no vocalist; it was the music itself that breathed and vibrated to the rhythm of the breath and beating of the heart. Benoit’s choice of moves for the musicians was impeccable, as the hour-long piece built up slowly to two climaxes, the tension palpable throughout. This was easily the best improvisation by a large Quebec ensemble heard here in many years. (…) 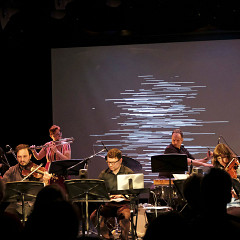 Ensemble SuperMusique (ESM)
This was easily the best improvisation by a large Quebec ensemble heard here in many years.