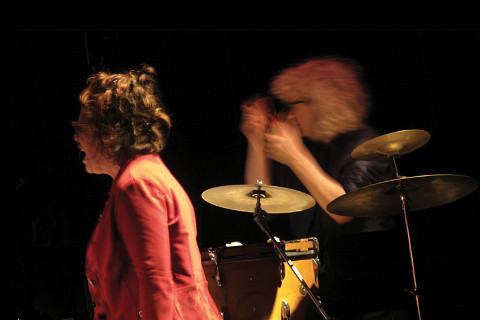 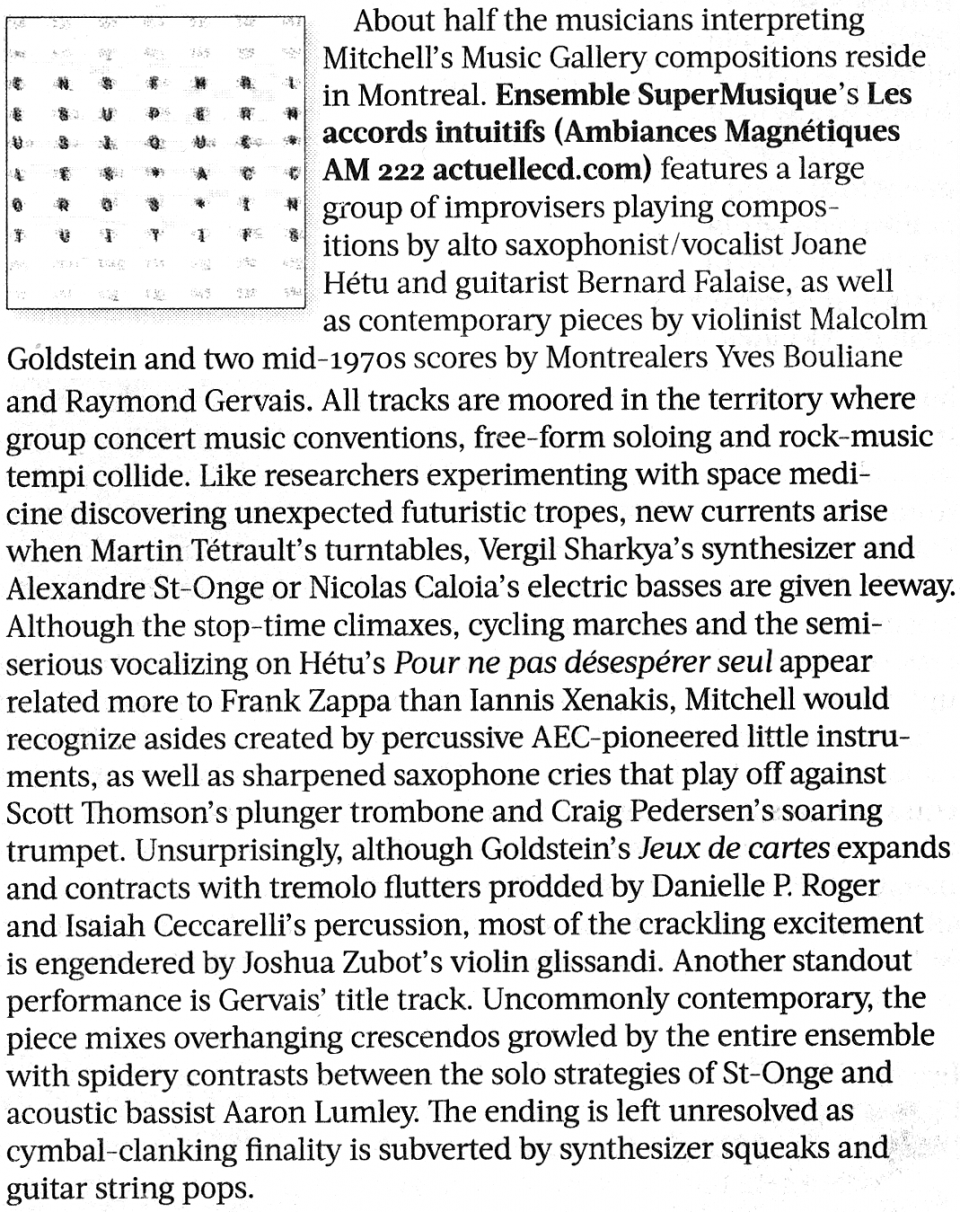 Confirming one again the continued vitality of the first generation of Free Music avatars, at 76, saxophonist Roscoe Mitchell is still innovating with divergent aspects of, instrumentation and arrangements. One demonstration of this occurs Sunday October 16, when he leads a mixed, 15-member, Montréal-Toronto ensembles through several of his composition a part of the Music Gallery’s annual X-Avant Festival. (…)

All tracks are moored in the territory where group concert music conventions, free-form soloing and rock-music tempi collide.

Calling yourself Ensemble SuperMusique is bound to raise high expectations in your audience, but the team of Jean Derome, Bernard Falaise, Joanne Hétu, Danielle Palardy Roger et al are clearly consummate musicians. Perhaps they mean that the music they play is some form of “hyper-music”, or “meta-music”, rather than implying they have super powers. On Les accords intuitifs (AM 222 CD), the players perform in various combinations with woodwinds, electric guitar, percussion, synths, violin, piano, bass guitar, and the human voice. The turntablist Martin Tétreault joins them for two pieces. Together, they play their interpretations of compositions by Malcolm Goldstein, Raymond Gervais (avant-garde conceptaluist and creator of multi-media pieces), Yves Bouliane (bass player in Le Quatuor de jazz libre du Québec), Bernard Falaise, and Joanne Hétu (noted in the last batch) — all of whom are Canadian, with the exception of Goldstein who is half American. All of the works are quite challenging to listen to, full of dissonances, tensions, and yawning gaps; I kind of like the way that classical modernism, free improvisation and contemporary rock noise all seem to meet up in the same room, but the conversations they hold are very forced and mannered, as if they were total strangers trying to be stiffly polite to each other.

I kind of like the way that classical modernism, free improvisation and contemporary rock noise all seem to meet up in the same room…

Les accords intuitifs is the fifth CD by Ensemble SuperMusique, a large Montréal-based group that performs compositions that are conceptual explorations. The core group consists of reed-players Jean Derome and Joane Hétu, guitarist Bernard Falaise, and percussionist Danielle Palardy Roger. On its latest recording, it expands to twelve members, in two different complements of musicians, for five pieces composed between 1976 and 2015. Methodologies vary from piece to piece, but the ensemble’s close listening and concentrated attention create consistently engaging music.

For Malcolm Goldstein’s constantly shifting Jeu de cartes (2014), each musician randomly selects four cards including graphic notation, a rhythmic pattern, a word in French, and a place in the performance’s time sequence. Ensemble SuperMusique uses the chance methodology to create both drama and surprise. Similarly, Raymond Gervais’s Accords intuitifs (debuted by Derome in 1976) assumes power and mystery in the long and short ensemble clusters and brief solo improvisations.

Joane Hétu’s Pour ne pas désespérer seul (2011) is a work in eight movements with the order spontaneously determined. It’s inspired by oppositional social sets (stationary / nomadic, etc.), but that hardly prepares one for the work; its materials including chanting (oddly suggesting the Mothers of Invention) and a manic and compound effusion that wittily updates the swinging big band, with brassy outbursts from trumpeter Craig Pedersen and trombonist Scott Thomson.

Like all of SuperMusique’s realizations, Les accords intuitifs is a genuine adventure.

Like all of SuperMusique’s realizations, Les accords intuitifs is a genuine adventure.

This is the fifth fabulous release from Montréal-based all-star ensemble led by Joane Hétu and Danielle Palardy Roger. Collective personnel includes Jean Derome (reeds), Bernard Falaise (guitar), Lori Freedman (clarinets), Martin Tétreault (turntables), Pierre Tanguay (drums) and Joshua Zubot (violin). There are some 20 musicians involved in this massive studio effort with two ensembles with revolving members. Each of the five pieces were written by members of the ensemble or composers: Malcolm Goldstein, Raymond Gervais and Yves Bouliane. The core of this ensemble are longtime members: Jean Derome, Joane Hétu and Danielle Palardy Roger, whose composing and playing have evolved and matured over several decades, hence there is often more going on than what we hear on the surface.

Malcolm Goldstein’s Jeux de cartes sounds free when it starts yet is animated and/or directed in tight spurts. The times that I’ve caught Ensemble SuperMusique live, there were some splendid hand signal directed improvisations going on. The title track by Mr. Gervais has a Morton Feldman/John Cage-like-like vibe/structure: stark at times, filled with careful silent sections, abrupt yet logical shifts. The overall effect is both mysterious and fascinating. The piece by Yves Bouliane is also stark with creepy whispers, minimal fragments and cautious improvisations. Parts of this remind me of those card-directed game pieces of John Zorn but on a more restrained level. If you listen closely, you can hear the way each sound or small group of sounds is carefully executed and manipulated. Joane Hétu seems to be the most consistent and diverse composer of the Ambiances Magnétiques stable. The final piece here is by Ms. Hétu and it is extraordinary: kaleidoscopic, swirling, circus-like at times, with some occasional hilarious twists & turns and bits of silly vocals (Jean Derome, perhaps?). Ensemble SuperMusique will be appearing at FIMAV fest in Québec in May of 2016. Can’t wait to check them out again. In the meantime, check out this gem and you will hear how special they are.

This is the fifth fabulous release from Montréal-based all-star ensemble led by Joane Hétu and Danielle Palardy Roger.