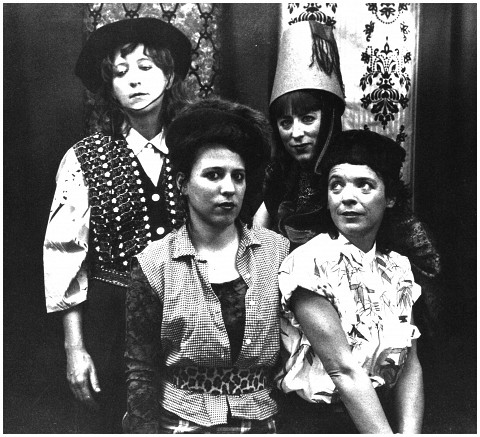 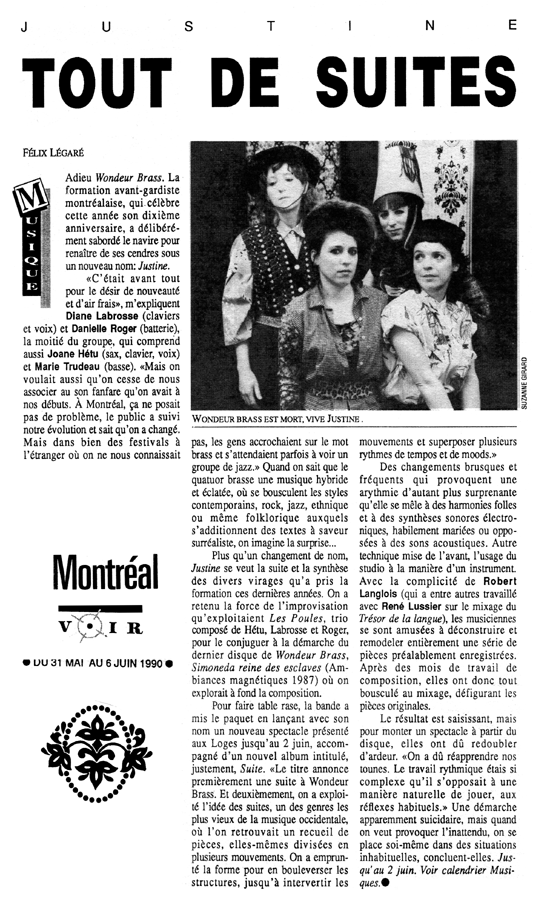 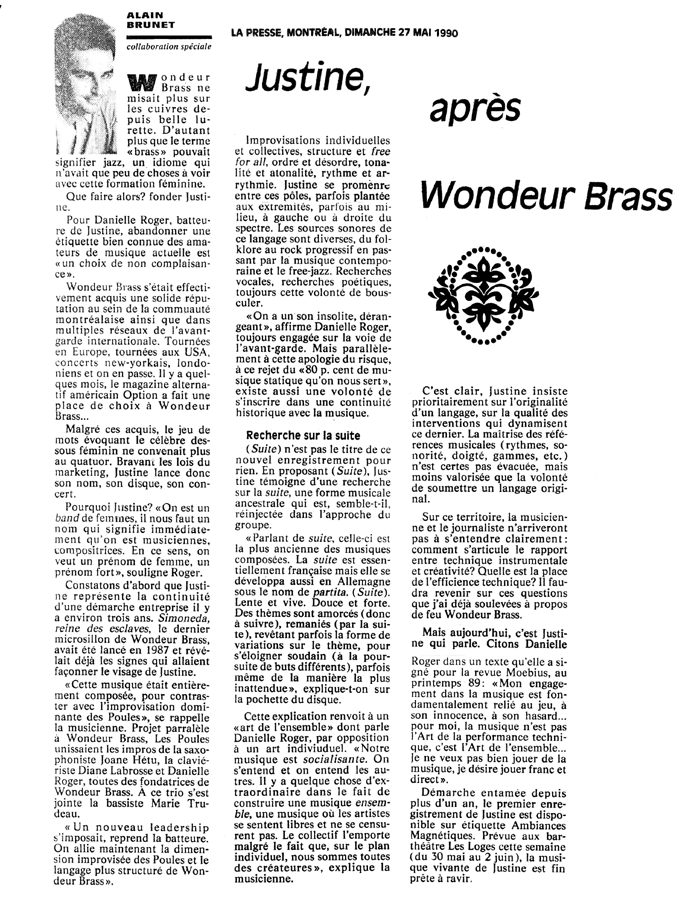 Never let it be said that the members of Justine aren’t prepared to improvise at the drop of a hat. When it seemed impossible to tape our chat because the erase lugon the cassette tape of awful corporate rock we were taping over had been punched out, keyboardist Diane Labrosse came to the rescue. She produced a band-aid.

The four members of Justine —Labrosse, saxophonist Joane Hetu, bassist Marie Trudeau, and drummer Danielle Palardy Roger — have never been reticent to try something new, either in studio or in concert. In their ten-year slint as Wondeur Brass and its hipper, more impulsive sister, Les Poules, their brazen, fresh collages of mood, style, and song helped set the standard for Québec’s new music movement, musique actuelle.

Now, as Justine, the Montréal quartet have shorn themselves of the “brass” (a lone saxophone remains) and started a new. Justine is about to unveil a new project thal both destroys the peception of a “woman’s group” as an albatross and creates breathtaking new musical possibilities in a brave new genre whose absence of borders can be just as problematic as limitations. Soon Justine will reap the harvest of a year’s work, but be careful. Justine’s musical blossoms are no ordinary flowers—they’re mone like fleurs carnivores.

By any other name

“When we started working on this new music, this new project, we knew that we were going to produce it under a new name.” says Labrosse. “We wanted to have a whole new repertoire of fresh air, liberated from the old Wondeur Brass. “

We’re sitting in a casse-croute around the corner from Justine’s east-end practice space, a cramped basement studio shared with Jean Derome, Pierre Tanguay, and “Serge l’Accordéoniste,” a mysterious figure no one ever sees. Outside, Masson street serves as a drag sirip— a praclise space for bikers.

But a rose by any other name is just a flower. Just how different will Justine he from the old Wondeur Brass?

“Musically we wanted to integrate more electronics,”says keyboardist Labrosse. “It’s almost a cross between what Wondeur Brass used to do and what Les Poules did. Wonder Brass went into the studio very much prepared, very much structured, and Les Poules did a lot of improvising. So we wrote the music—themes, arrangements. And then we went in the studio. We recorded some material, changed it around and shaped it more through improvising. So it’s a bit of a blend. And that’s what makes our new sound. “

“We used the studio and the recordig process—montage, cuting, and editing— as if it was another musical instrument,” says drummer Roger, as another Harley rips up the street. “We literalIy transformed our sound in the studio. It was the first time it took close to a whole year to record an album. It gave us time to reflect and to let the music become much, much more intricate. Not that the other albums aren’t intricate, but Justine is more so. “

Roger admits that dwindling finances curlailed this luxurious fine-tuning. “It’s always a question of money, and we had to decide it was finished. But this record is just one step in the direction of this music, and we are still continuing that direction,” says Roger. “In Les Poules we were always in the process of re-evaluating the evolution of our music. So, yes the record is done, but our music is far from finished. “

Listening to Justine is like getting a free ticket to an old amusement park once run by Carla Bley, ravaged by Alben Ayler, and rebuilt by John Zorn. Every kind of music ever made by humankind is in here, plundered, sifted, gutted, rearranged, then stitched and carefully glued into place.

The funhouse starts with Le monstre, an odd Noh-style cabaret with a strong sense of dynamics. The tunes that follow pulse with a moody, see-saw organ or twitch with herkyjerky calliopes reminiscent of Bley. Most have swift, abrupt changes in mood, tempo, and musical style, going from rippling keyboard runs to free saxophone squalls. Some songs, like the double blast of J’ai perdu le temps and J’ai perdu le sommeil, throw away the boundaries altogether.

“It is going a step further,” says Labrosse. We usually switch around our music very fast, but this time we’re pushing it even further. But then again, we’ve never produced anything that’s easy to listen to, that you can put on and have dinner at the same time.

“We based ourselves from the beginning on the classical suite, which has different movements. And we wanted to build the record this way, with different movements within the tracks. The whole record isn’t one piece as such, unless you look at it as one piece with very different moods and colours and textures.”

The sound of the female voice figures prominently on Justine, but not just in song. Justine uses its four voices percussively, rhythmically, and melodically. On L’Intelligence du coeur, massed or disembodied radio voices seep through the savage, free jazz keyboard bluns. Elsewhere they shriek, whisper, caress, laugh, and yelp. “We always said that we were not authentic golden voices with pristine range,” says Labrosse. “We’ve always integrated the voice as another instrument. This is why everyone sings; none of us is more accomplished than the other. Something new is that everybody sings on the same tune. We throw the ball at each other much more than we did before. Before Joane would sing cinema, Danielle would sing les amours, but now in one song it goes around to everybody. “

Justine also enlisted the aid of New York’s resident electric harpist, Zeena Parkins, as well as Tenko Ueno, the Japanese queen of onomatopoeic jazz and member of Mizutama Shobodan —The Polka Dot Fire Brigade. ‘ We found definite similarities in the energy, and in their way of working,” says Labrosse. We all seem to have a craft in sounds,” adds Roger.

The stunning complexity of the new release may free Justine from the strictures irilposed by a society that emphasizes genderover musicianship. “That’s changed primarily in our own minds,” says Labrosse. “At some point you stop focusing on gender, and in the last years we focused on the fact that we are musicians. Of course the rest of us comes along, like everyone’s personality comes into your work. That in itself is a fresh perspective. We don’t need to spell it out. “

Roger concurs. “More and more our collaborations, whether within Justine or with others, are approached on a musical level, and everyone has to pull their weight. “

As for the mysterious new name, it doesn’t come from anywhere in panicular. Roger does offer this explanation: “It’s a name that’s direct, plain, but at the same time reverberates with possible significances.”

Listening to Justine is like getting a free ticket to an old amusement park once run by Carla Bley, ravaged by Alben Ayler, and rebuilt by John Zorn. 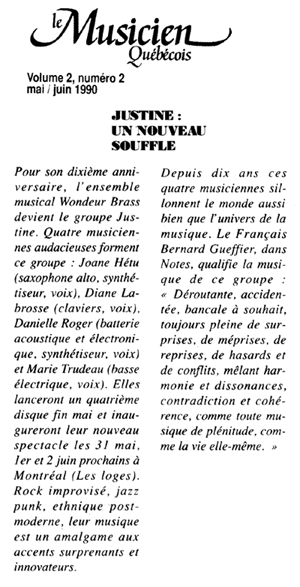 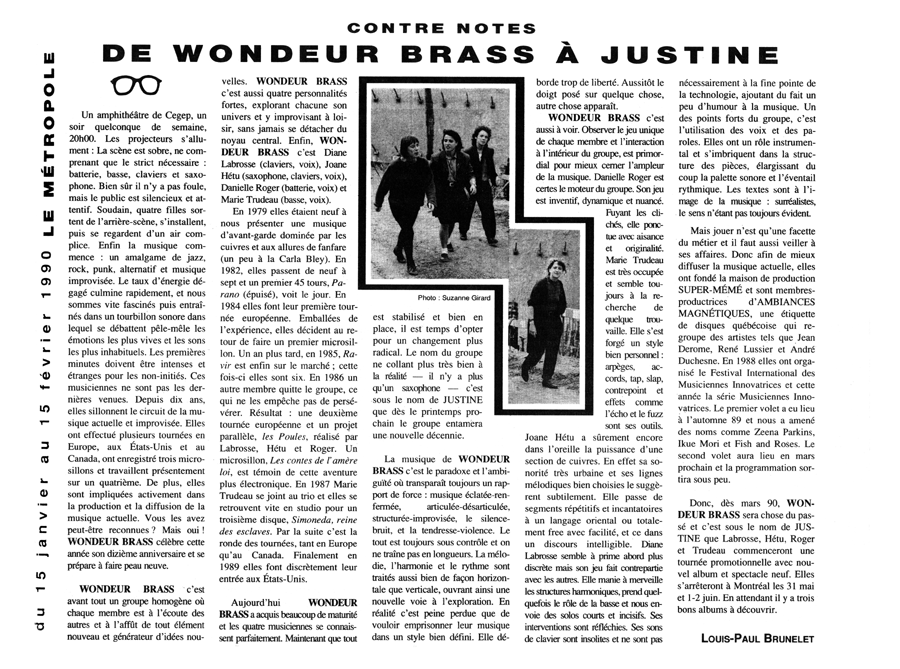