A Balkanese tour for Jean Derome et les Dangereux Zhoms. Croatia, Slovenia, Serbia. Also on this tour, Diane Labrosse will take part to an evening of improvised music with The Dangereux Zhoms for a film in Lublana, in addition to performing in duo with Pierre Tanguay. The Tanguay/Labrosse concerts in Lublana and Belgrade gave birth to the project La musique de mon disque.

Les Dangereux Zhoms (could be translated as “The Dangerous Men”) is saxophonist Jean Derome’s most cherished vehicle for his jazz compositions. The band has been together since 1993 and now lives in symbiosis with its leader’s writing. The music blends some standard be-bop elements to rock, new jazz and cut-and-paste. Fun constitutes a key aspect of the musical endeavor and Derome’s scores often call for talking, acting and other stage antics from the musicians. His precise writing includes pockets of free improvisation and alternates between in-your-face stamina and more emotional passages.

Although very actual in their approach, Les Dangereux Zhoms never cross into abstract music: even the more difficult pieces remain anchored in a new jazz tradition Derome helped establish, seasoned with that special Montréal sense of humor and self-mockery. He plays with harmony as if it were a schoolyard game, constantly pushing the piece inside and outside the key. That and his clever use of polyrhythms provide the listener with a seemingly common frame, while keeping him guessing all the way through: accessibility does not mean sacrificing on excitement. 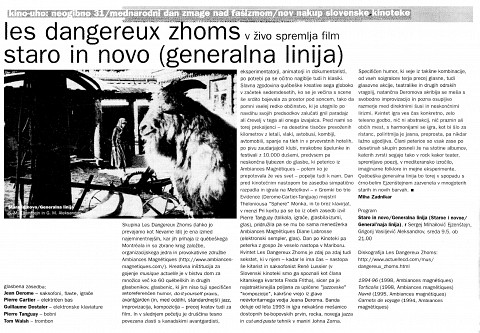