Founded in 2012 and directed by Joane Hétu, Joker is an a cappella choir comprising a dozen vocalists. This unconventional vocal ensemble explores vocal texture and timbre; rhythmic motifs; sound poetry; and extramusical sounds like breath, babbling, and mouth noise. Joker is invested in marginal sounds, peripheral territories, and the spaces between the tones of conventional choir singing, and does so not through established repertoire, but by inventing its own language to suit. Joane Hétu guides the singers through improvisation and aleatoric music with a variety of conducting gestures, while leaving considerable space for the performers’ imagination.

Joane Hétu, for the composition of the piece Les Lucioles (Fireflies), joined forces with Jean Derome and Danielle Palardy Roger. The trio will be joined by 17 vocalists from Montréal’s music, dance and theatre community, all of whom share a frenzy of expressing themselves through the idiosyncratic use of their voices.

“This is an ambitious work, requiring the utmost of precision and attention to detail…” — Mike Chamberlain, All About Jazz [Read article]

“Something about fireflies and the light between heaven and hell.” — Eric Hill, Exclaim! [Read article] 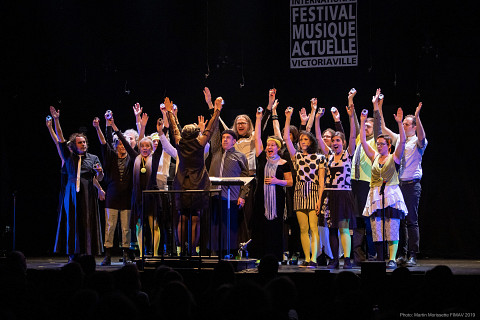