This is the fifth fabulous release from Montréal-based all-star ensemble led by Joane Hétu and Danielle Palardy Roger. Collective personnel includes Jean Derome (reeds), Bernard Falaise (guitar), Lori Freedman (clarinets), Martin Tétreault (turntables), Pierre Tanguay (drums) and Joshua Zubot (violin). There are some 20 musicians involved in this massive studio effort with two ensembles with revolving members. Each of the five pieces were written by members of the ensemble or composers: Malcolm Goldstein, Raymond Gervais and Yves Bouliane. The core of this ensemble are longtime members: Jean Derome, Joane Hétu and Danielle Palardy Roger, whose composing and playing have evolved and matured over several decades, hence there is often more going on than what we hear on the surface.

Malcolm Goldstein’s Jeux de cartes sounds free when it starts yet is animated and/or directed in tight spurts. The times that I’ve caught Ensemble SuperMusique live, there were some splendid hand signal directed improvisations going on. The title track by Mr. Gervais has a Morton Feldman/John Cage-like-like vibe/structure: stark at times, filled with careful silent sections, abrupt yet logical shifts. The overall effect is both mysterious and fascinating. The piece by Yves Bouliane is also stark with creepy whispers, minimal fragments and cautious improvisations. Parts of this remind me of those card-directed game pieces of John Zorn but on a more restrained level. If you listen closely, you can hear the way each sound or small group of sounds is carefully executed and manipulated. Joane Hétu seems to be the most consistent and diverse composer of the Ambiances Magnétiques stable. The final piece here is by Ms. Hétu and it is extraordinary: kaleidoscopic, swirling, circus-like at times, with some occasional hilarious twists & turns and bits of silly vocals (Jean Derome, perhaps?). Ensemble SuperMusique will be appearing at FIMAV fest in Québec in May of 2016. Can’t wait to check them out again. In the meantime, check out this gem and you will hear how special they are. 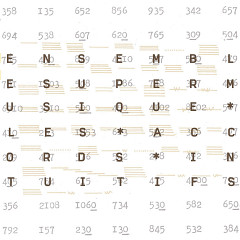