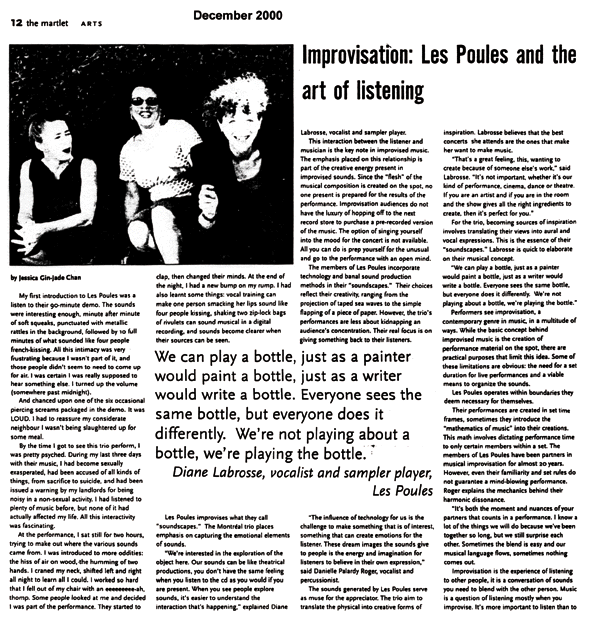 Les Poules improvises what they call “soundscapes.” The Montréal trio places emphasis on capturing the emotional elements of sounds.

“We’re interested in the exploration of the object here. Our sounds can be like theatrical productions, you don’t have the same feeling when you listen to the cd as you would if you are present. When you see people explore sounds, it’s easier to understand the interaction that’s happening,” explained Diane Labrosse, vocalist and sampler player.

This interaction between the listener and musician is the key note in improvised music. The emphasis placed on this relationship is part of the creative energy present in improvised sounds. Since the “flesh” of the musical composition is created on the spot, no one present is prepared for the results of the performance. Improvisation audiences do not have the luxury of hopping off to the next record store to purchase a pre-recorded version of the music. The option of singing yourself into the mood for the concert is not available. All you can do is prep yourself for the unusual and go to the performance with an open mind.

The members of Les Poules incorporate technology and banal sound production methods in their “soundscapes.” Their choices reflect their creativity, ranging from the projection of taped sea waves to the simple flapping of a piece of paper. However, the trio’s performances are less about kidnapping an aydience’s concentraffon. Their real focus is on giving something back to their listeners.

“The influence of technology for us is the challenge to make something that is of interest, something that can create emotions for the listener. These dream images the sounds give to people is the energy and imagination for listenen to believe in their own expression,” said Danielle Palardy Roger, vocalist and percussionist.

The sounds generated by Les Poules serve as muse for the appreciator. The trio aim to translate the physical into creative forms of inspiration. Labrosse believes that the best concerts she attends are the on” that make her want to make music.

“That’s a great feeling. this, wanting to create because of someone else’s work,” said Labrosse. “It’s not important, whether it’s our kind of performance, cinema, dance or theatre. If you are an artist and if you are in the room and the show gives all the right ingredients to create, then it’s perfect for you.”

For the trio, becoming source of inspiration involves translating their views into aural and vocal expressions. This is the essence of their “soundscapes.” Labrosse is quick to elaborate on their musical concept.

Perfommers see improvisation, a contemporary genre in music, in a multitude of ways. While the basic concept behind improvised music is the creation of performance material on the spot, there are practical purposes that limit this idea. Some of these limitations are obvious: the need for a set duration for live perfommances and a viable means to organize the sounds.

Les Poules operates within boundaries they deem necessary for themselves.

Their performances are created in set time frames -, sometimes they introduce the “mathematics of music” into their creations. This math involves dictating performance time to only certain members within a set. The members of Les Poules have been partner in musical improvisation for almost 20 years. However, even their familiarity and set rules do not guarantee a mind-blowing perfonmance. Roger explains the mechanics behind their harmonic dissonance.

“Its both the moment and nuances of your partners that counts in a performance. I know a lot of the things we will do because we’ve been together so long, but we still surprise each other. Sometimes the blend is easy and our musical language flows, sometimes nothing comes out.

Improvisation is the experience of listening to other people, it is a conversation of sounds you need to blend with the other person. Music is a question of listening mostly when you improvise. It’s more important to listen than to