Productions SuperMusique and Joane Hétu would like to thank the Conseil des arts et des lettres du Québec (CALQ), the Canada Council for the Arts (CCA), the Conseil des arts de Montréal (CAM), and the SOCAN Foundation, along with our media sponsors: Le Devoir, Radio-Montréal, CKUT, and Ici.

In October 2002, Usine C hosted Productions SuperMusique for the North-American premiere of Each… and Every Inch, a multimedia work based on the life and work of Canadian writer Elisabeth Smart. Then in April 2005, the company returned with Palimpseste d’orchestre, a grand concert that used material written since the Wondeur Brass days as the basis for a celebration of its quarter-century anniversary. Now, Usine C welcomes SuperMusique once more with saxophonist/vocalist Joane Hétu’s latest work Filature, a “sound theatre” in three acts.

Filature is a musical allegory on the materials weavers use: warp, weft and pattern. Joane Hétu unveils creative fabrics of sound and visuals, where music, dance, video art and lighting intertwine. She is surrounded by ten musicians from the Ensemble SuperMusique (five men, five women), as well as two dancers and four stage designers.

In another life, before becoming a musician, Joane Hétu was a weaver. She has decided to pour her knowledge of yarn and loom into her latest composition, thus giving herself a new musical challenge. The strong and noble yarns of the warp interwoven with the light, silky, shimmering yarns of the weft provide the starting point of Filature, a musical allegory that unveils creative patterns combining music, dance, video art and lighting.

Ever since Castor et compagnie, up to her Nouvelles musiques d’hiver, composer/musician Joane Hétu has been treating us to texture-rich and flavourful works, sonic and literary boldness, flirty songs and sweet melodies. With Filature, she delivers a work that reaffirms her unique approach to music. It features musique actuelle, texts, songs, bruitist textures and free improvisation, all coloured by her trademark touch: an evocation of the fusion between opposite forces-tight and flexible, male and female.

For these performances, Joane Hétu brought together musicians from the Ensemble SuperMusique — a shapeshifting ensemble devoted to the performance of musique actuelle and improvisation — and two dancers for whom she wrote this piece. She also recruited stage designers Pierre Hébert (video art), Bernard Grenon (sound), Guillaume Bloch (lighting), and Louis Hudon (costumes).

Twelve creative, virtuoso performers share the stage: on one side, five musicians and a dancer, all male; on the other side, five musicians and a dancer, all female. The Men’s Team — musicians Guido Del Fabbro, Jean Derome, Normand Guilbeault, Pierre Tanguay and Nemo Venba, plus dancer Daniel Soulières — make up The Warp. The Women’s Team — musicians Mélanie Auclair, Claire Gignac, Joane Hétu, Diane Labrosse and Danielle Palardy Roger, plus dancer Séverine Lombardo — are The Weft. Together, these 12 performers form The Pattern.

The Warp — The Weft — The Pattern

A fabric-work where music reigns supreme, woven with the help of the dancers and stage designers.

Tight and strong, the warp yarn shall be made of noble fibers only

Featuring only the male performers — five musicians, one dancer — and the stage designers, this first act represents the warp yarn, the basis of any piece of fabric. A metaphor on continuity, stability and union, this sound space consists of sustained sounds and repeated sequences.

Shimmering, fine and colourful, the weft yarn shall be soft and flexible

Performed by the women — five musicians, one dancer — along with the stage designers, this act represents the weft yarn, which is used to weave the fabric. It is here a metaphor on the weaver’s imagination. A suite of musical textures and colours, the weft is orchestrated to produce a sound space rich in tones, moods and dynamics.

Featuring the whole ensemble — ten musicians, two dancers — and the four stage designers, this act represents the assemblage of the warp and weft yarns. The fabric and its patterns finally take shape. This delicate blending of the music and textures presented in the previous acts make us lose sight of warp and weft: now the weaver’s art comes to the fore, with wonderful patterns emerging on the fabric. 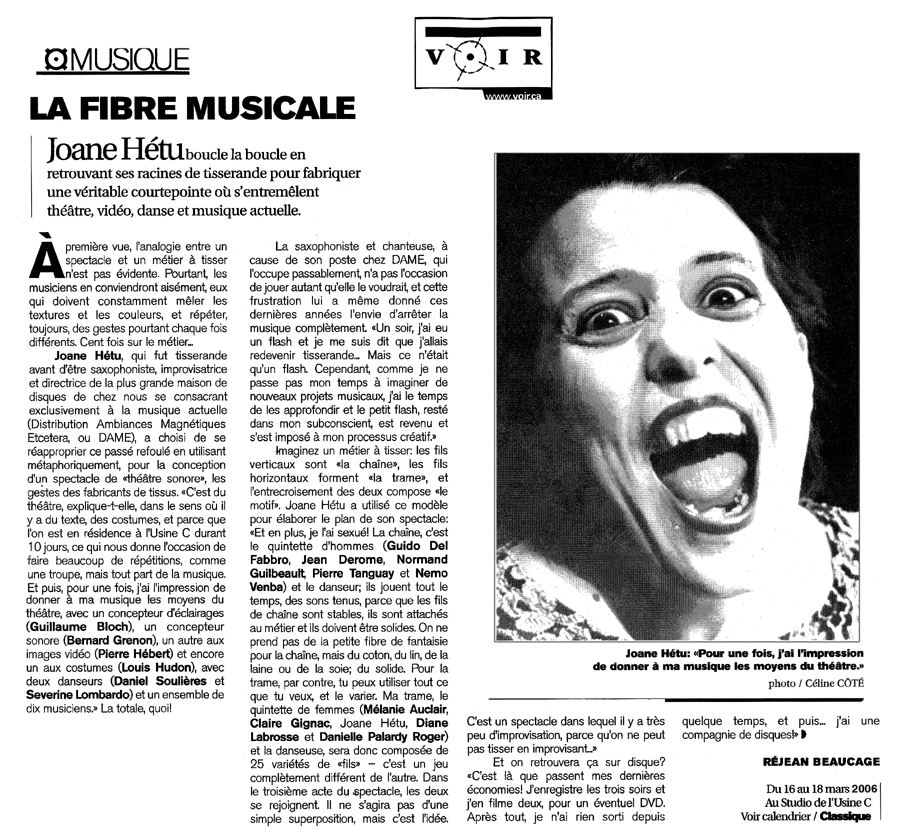 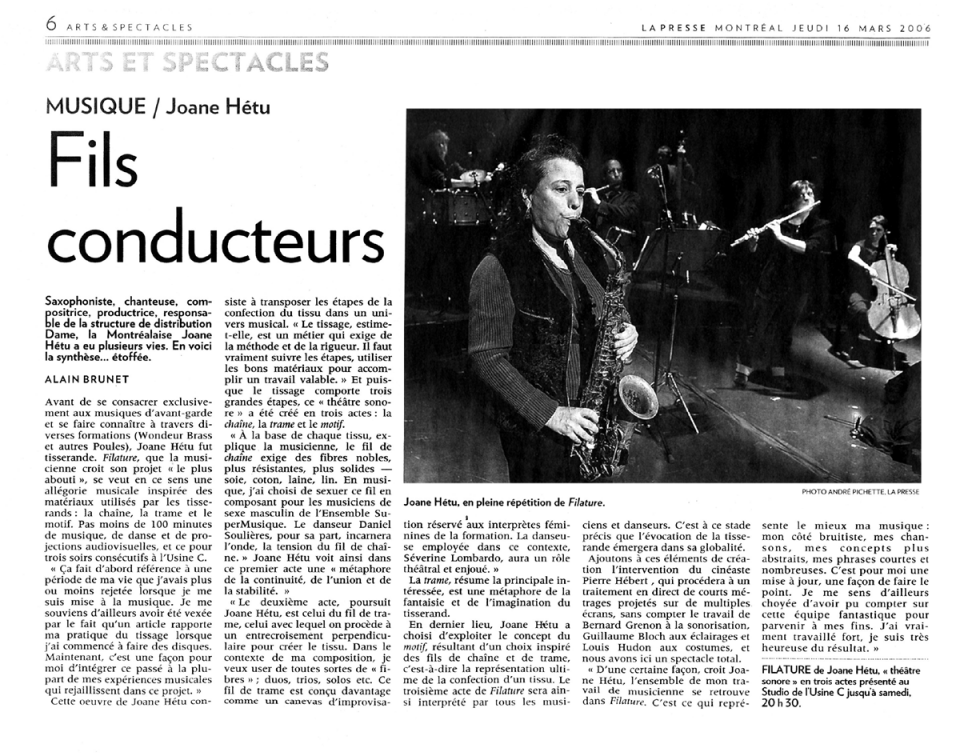 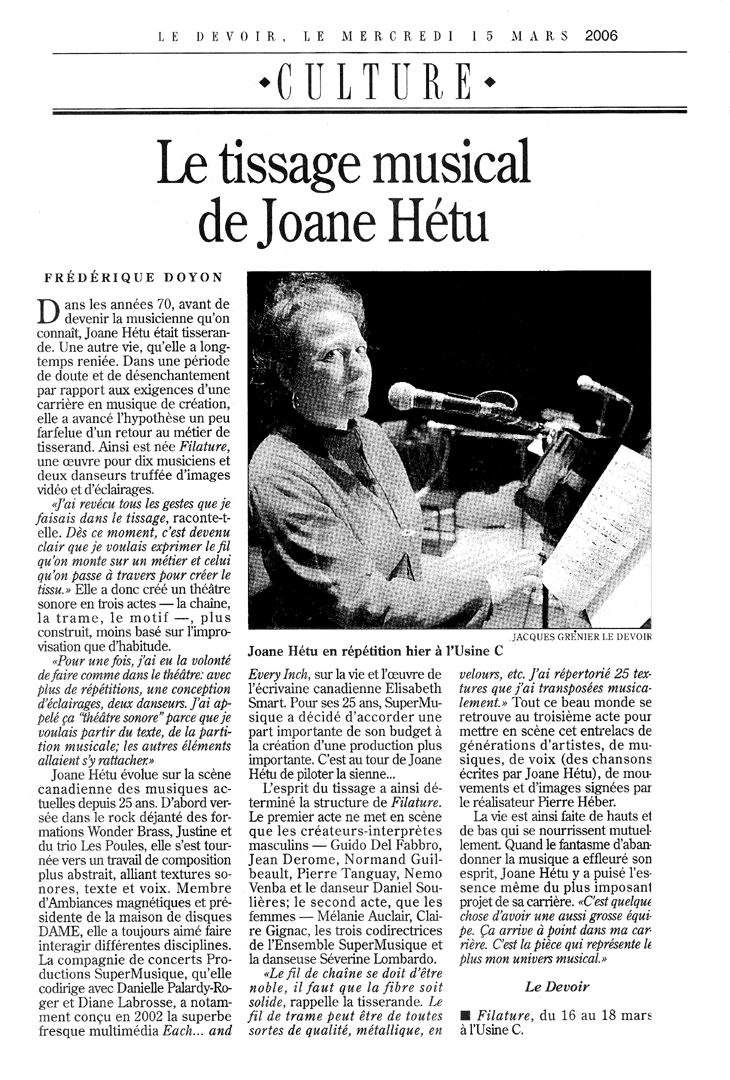 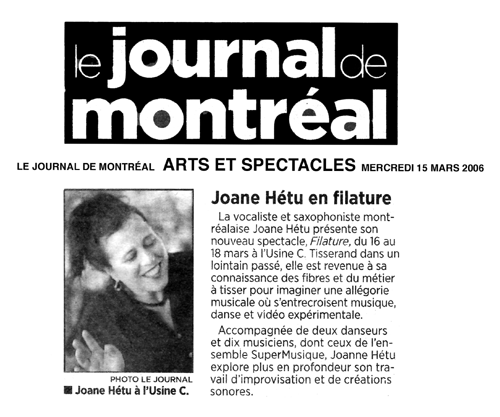 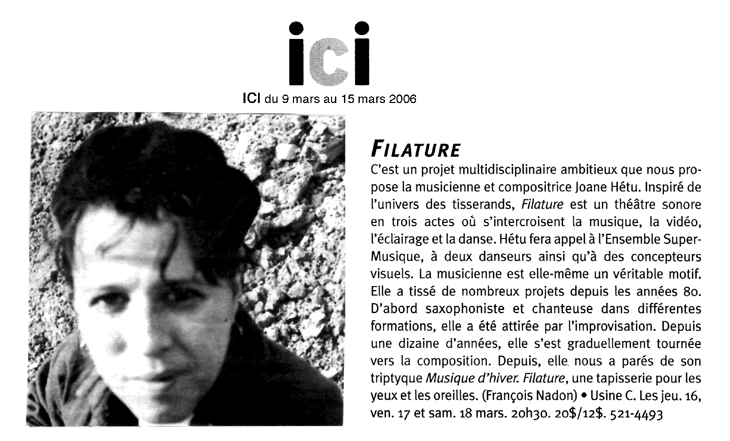 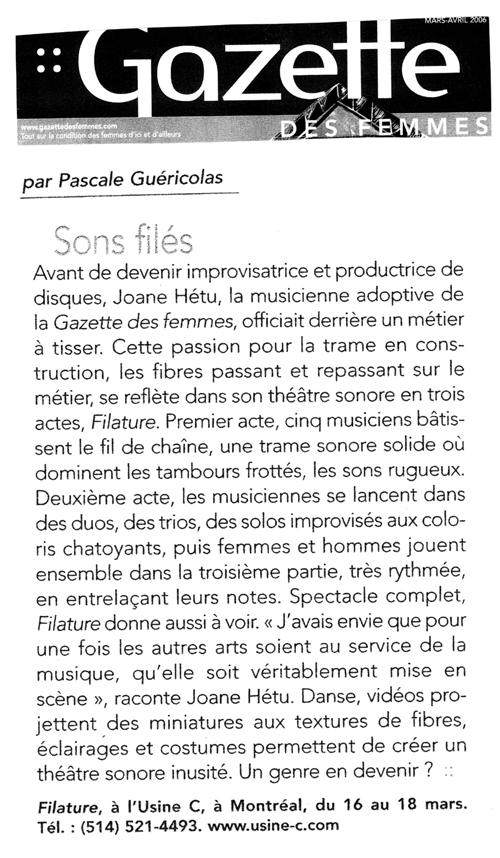 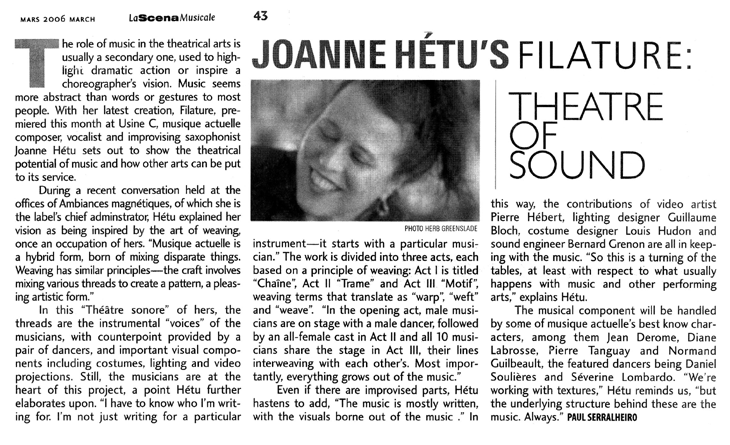