Vancouver-based guitarist/composer Ron Samworth is known on the Canadian improvised/contemporary music scene as an inventive textural improviser and a strong fluid melodicist informed and inspired by a variety of music traditions including jazz, rock, new music and folk music of many cultures. He leads the acclaimed Vancouver-based quartet Talking Pictures and co-leads the NOW Orchestra and is a member of Francois Houle’s electro-acoustic quartet and the Hard Rubber Orchestra.

His inter-disciplinary work includes composition, performance and sound design for theatre, spoken word, film, and dance. He has composed music for Talking Pictures, Standing Wave, the Hard Rubber Orchestra, the NOW Orchestra and EDAM Dance Company. Samworth is also a longtime member and from 1992 to 2003 the artistic director of the New Orchestra Workshop (NOW), and a co-curator of a weekly concert series at Vancouver’s grunt Gallery from 1987 to 1994. 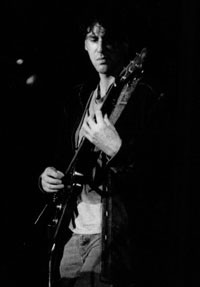