Following a unique artistic path, Pierre-Yves Martel is constantly renewing his musical identity and practice. Though a multi-instrumentalist, he identifies himself first and foremost as a sound artist whose work oscillates between perpetual research and experimentation. It is in this spirit that he has revisited the viola da gamba, utilizing this traditional instrument in new contexts which reengage it with the contemporary world. Having created an authentic musical language through non-conventional techniques and instrumental preparations, he also works outside of instrumental music altogether, using a variety of objects rife with untapped sonic possibilities, from contact-mics and speakers to motors, wheels, surfaces and textures.

After studying composition as well as classical and jazz double bass, Pierres-Yves left his native Vanier, Ontario in 2004 to establish himself in Montreal. He wasted no time immersing himself in the arts scene and meeting a number of musicians who would later become close collaborators. In 2008, he abandoned the double bass in order to focus on the viola da gamba, an instrument in which he sensed vast creative potential. Today, Pierre-Yves works in Montreal as well as on the Canadian and international stages through various projects and collaborations. 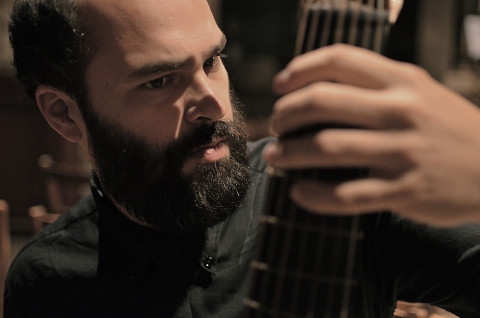