Philippe Lauzier is an active member of the Quebec creative music scene. Instrumentalist, composer, and sound artist, he participates in several regular and occasional projects in Canada and overseas.

As a soloist, he is largely defined by his research of, and experimentation with, the acoustic possibilities of the bass clarinet and alto and soprano saxophones. His playing blends the influence of contemporary musical languages as well as sounds from non-Western sources. Creative extended techniques, complex drones from which polyphonies emerge, and a performance marked by compositional rigour are the caracteristics of his style. In 2013, he recorded his first solo album, Transparence, which was hailed by critics as “An engrossing listen” and “nothing less than a masterpiece”.

He has developed several fruitful collaborations in improvisation, including Sainct Laurens with Pierre-Yves Martel, with whom he released a second recording on vinyl in 2014. Martin Tétreault regularly joins the duo to form Xyz, an electro-noise trio. Philippe is also a member of Quartetski, which rethinks and reinterprets the works of great composers in an improvised setting.

Other projects, such as Toiture, with percussionist Corinne René, adopt an approach in which forms and precise material are at first composed, then freely developed. With this duo, he has presented works in Quebec, France, the United States, as well as in Austria during a residency at AIR Hotelpupik. Philippe also composes music in collaboration with artists in dance (Kelly Keenan, Kira Kirsch, Isabelle Van Grimde), theatre (Simon Boudreault, Michel F Côté), and visual arts (Marie-Michelle Deschamps).

Philippe’s research has also led him to create his first sound installation, presented at the 30th Festival international de musique actuelle de Victoriaville. Gritty is an instrumental installation for bass drum, bells, and autoharps, prepared with different found objects attached to small automatic motors. This miniature orchestration allows the listener to hear the vibrations, rubbing, squeaks, and metaphorical characteristics of the objects. 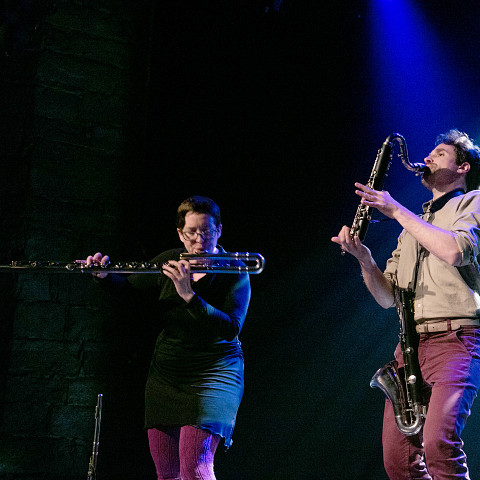