Be it electroacoustic music, mixed music, sound installations or improvisations, the music of Monique Jean is engaging a present that happens now. She focuses on the tensions, fractures, and shocks of sound materials to transmute reality into poetry. She works on sound materials as if they were complex organisms animated by forces that keep them in constant evolution.

Since 2012, in search of a harsh, raw sound, she has been integrating analogue and no-input elements to her set-up as sources of instability and unpredictability. This approach spawned the Volt series (started in 2015) and Dancing on the Edge of Darkness (2012), accompanied by a five-screen video by Monique Bertrand.

Her works have been selected by several competitions and performed and broadcast in several national and international concerts and festivals, including Multiphonies (Paris, France), Akousma (Montréal), Sonorities (Belfast, Northern Ireland), NYCEMF (New York, USA), The San Francisco Tape Music Festival (USA), Ai-maako (Santiago, Chile), and Elektra (Montréal). In 2012, she was invited for a residency at Fondation Civitella Ranieri in Umbertide (Italy).

Her recent album Greffes won the 2012-13 Prix Opus for Best Album — Musique Actuelle & Electroacoustic Music awarded by the Conseil québécois de la musique (CQM). A year later, her piece T.A.G. was nominated for the 2013-14 Prix Opus for Premiere of the Year. 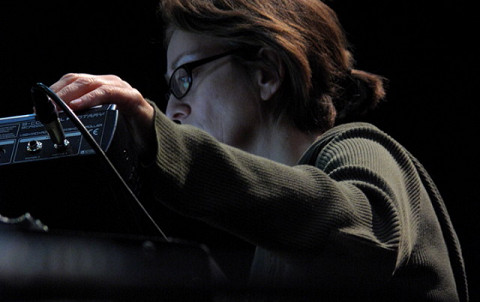