Six years already have passed since Pierre-Yves Martel and Carl Ludwig Hübsch, a most distinguished member of the European improv music scene, began working together. After their most recent Canadian tour, the idea was born to invite two like-minded Montréal female musicians to join them: both Joane Hétu and Émilie Mouchous gladly accepted the invitation. The Hmmh ensemble promises to be an open laboratory where each member’s musical approaches will humbly meet in order to create a space where sparse and minimal sound will open up new ways of listening. HMMH has produced an album on Ambiances Magnétiques and several concerts in Québec. 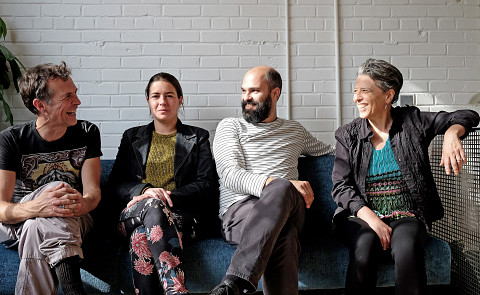 Eerie, haunting, reverberant, innovative. Those are some of the words you can apply to the music of the group HMMH (Hétu — Martel — Mouchous — Hübsch). Composed of well-known members of Quebec’s avant-garde jazz and creative music scene, the quartet has just released a new album Fleur de chaos. They’ll be showcasing this album in an IMOO series show at General Assembly on Sunday.

Saxophonist and composer Joane Hétu has co-directed the Ensemble SuperMusique, a major force in Quebec’s jazz scene, since its founding in 1998, as well as the weekly series Mercredimusics since 2002. Pierre-Yves Martel’s main instrument is the viola da gamba, but he has reinterpreted this traditional instrument for a new century, creating “an authentic musical language through non-conventional techniques and instrumental preparations”, He he also works outside of instrumental music altogether, using a variety of objects rife with new sonic possibilities, from contact-mics and speakers to motors, wheels, surfaces and textures. Ottawa audiences have most often heard composer and tuba player Carl Ludwig Hübsch through his trio with Martel, Hübsch Zoubek Martel, which plays improvised music characterized by the transparent overlaying of wonderful timbres through intelligent-but-spontaneous structures. Émilie Mouchous “makes electronic instruments that induce touch and movement that find their context in improvised performance and installation. Inventor of the term ‘mouth feedback,’ she uses a panoply of everyday and absurd objects, and enjoys ‘playing the spaces’ that receive her.”