Nine of its members were part of the loose collective L’Enfant Fort (1975), which used to parade its trumpets and drums in the streets of Montréal on Saturday afternoons; of the Pouet Pouet Band (1978), an orchestra that merged cabaret and theatre to its original compositions and “from which emanates a taste of black coffee that whips up the central nervous system” (Jean-Robert Sansfaçon); Le Temps Fou and Montréal Transport Limité (1981), an underground cabaret. Then, as they say, we all went our separate ways… And in the summer of 1995, simply for the pleasure of playing together again, the Fanfare Pourpour came to life.

There are 15 of them, aged 21 to 68 — musicians, actors, graphic designers, radio host, computer scientist — and they play an original form of music, both sad and happy, where happiness, disorderliness and poetry live in harmony. Through the years, the Fanfare has been nourished by the arrival of young talents (Némo Venba, Guido Del Fabbro, Pierre-Emmanuel Poizat, Luzio Altobelli) and by musicians from the Montréal jazz and mew music scenes (Normand Guilbeault, Jean Derome, Claude Vendette, Pierre Tanguay). 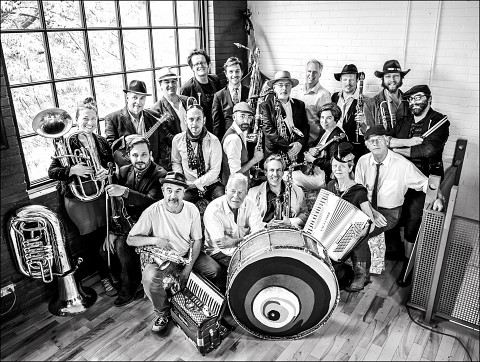